Eric Stonestreet has a new lady love in his life.

And on Wednesday he brought her to the set of The Ellen DeGeneres Show where he talked up his sitcom Modern Family that kicks off its tenth season.

But couldn’t resist chatting about the new love of his life, Lindsay Schweitzer. 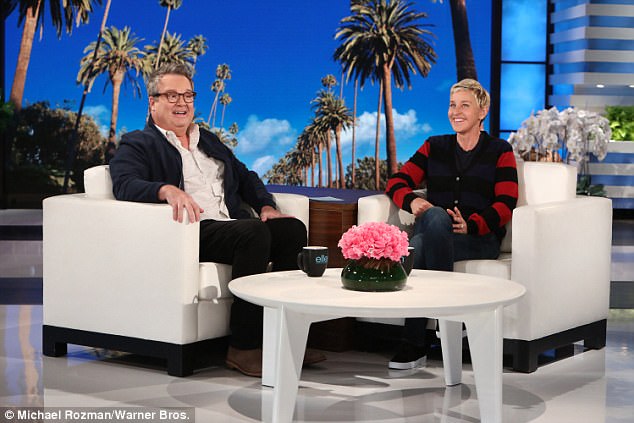 Enjoying a chat: Eric Stonestreet put in an appearance on The Ellen DeGeneres Show to talk up his sitcom, Modern Family, which kicks off its tenth season on Wednesday

‘She’s lovely, I met her back stage and she’s a nurse,’ Ellen said. ‘That’s a good thing for you as you’re a hypochondriac.’

As Ellen tried to agree, he surprised someone in the audience by jokingly shouting:  ‘What are you looking at, ma’am?’

‘You scared the hell out of that lady,’ Ellen quipped as the audience roared with laughter. ‘My nurse girlfriend will take care of you,’ Eric reassured the woman. 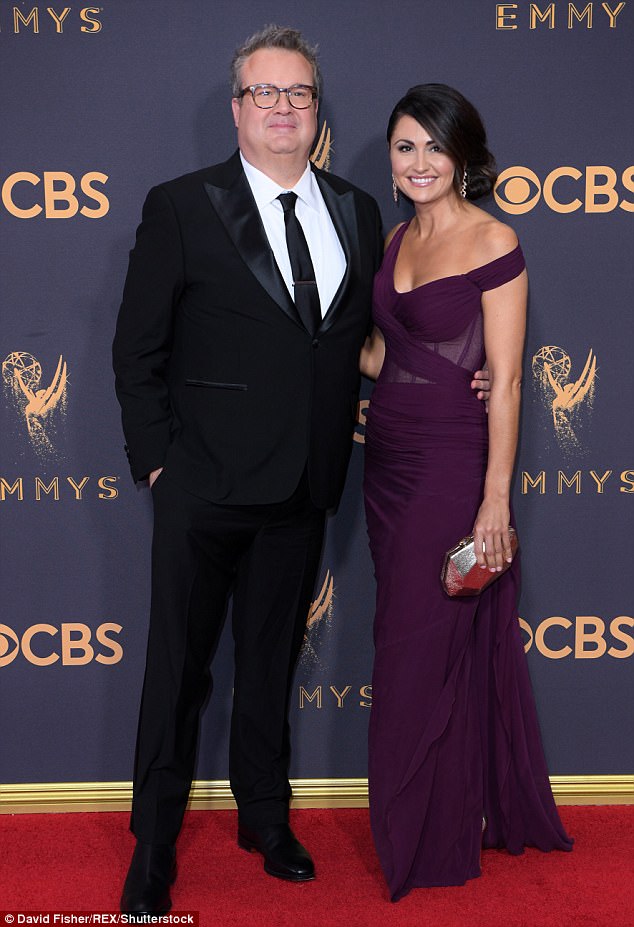 ‘I’m a big baby’: Eric couldn’t resist spilling the bean about the new love of his life, Lindsay Schweitzer, saying, ‘She calms my nerves. I’m a very high-strung person, you can tell right?’ Seen in mid September at the Emmys

The couple started dating after meeting during the Big Slick charity weekend in Kansas City in June.

‘So you also have a new man in your life – I love this,’ Ellen continued.

The new ‘man’ turned out to be rescue dog Roscoe, who he adopted exactly a year after the death of his beloved pooch Coleman. 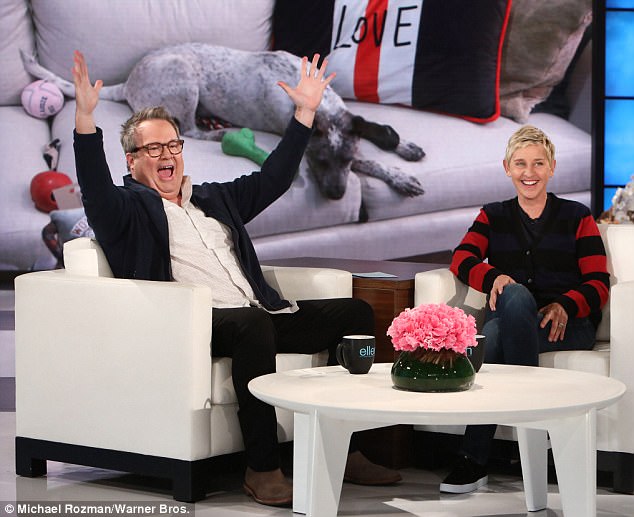 And here’s the new man in his life: Rescue dog Roscoe, who he adopted exactly a year after the death of his beloved pooch, Coleman, saying, ‘He saved me’ 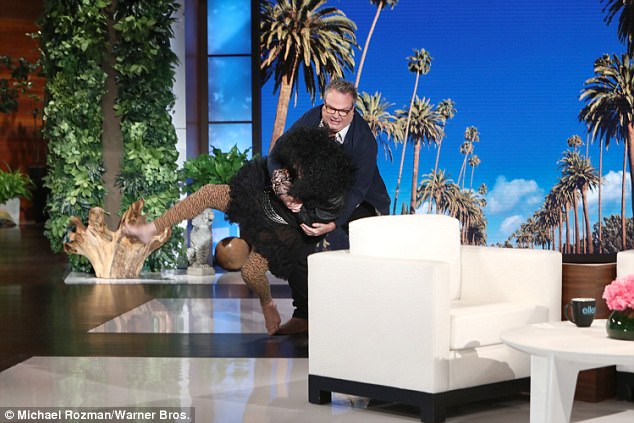 He didn’t expect that: Ellen’s ‘scaremaster’ Cory has frightened the life out of the actor on many occasions over the years – but Eric got his own back

‘He saved me. He came into my life for a reason,’ Eric shared.

A backstage shot showed the pup playing with a pile of toys. ‘Did I give him enough?’ Ellen asked before adding that they were all a gift for Roscoe.

The star also secretly teamed up with Ellen to turn the tables on her ‘scaremaster’ Cory, who has shocked Eric on more than one occasion. 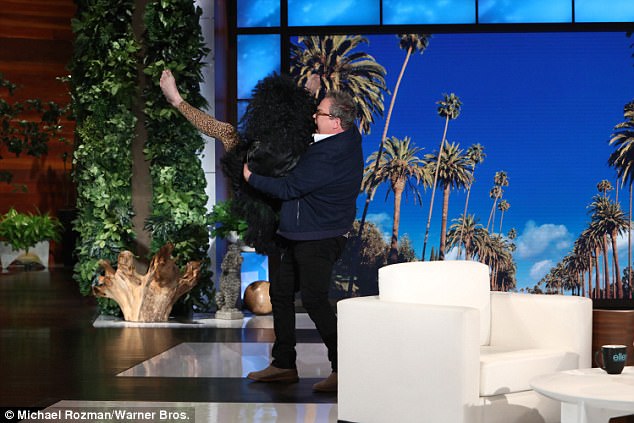 Stronger than he looks: Ellen tipped off Eric that Cory was going to jump out on him as he told a story about a young fan – and the star was ready for  him 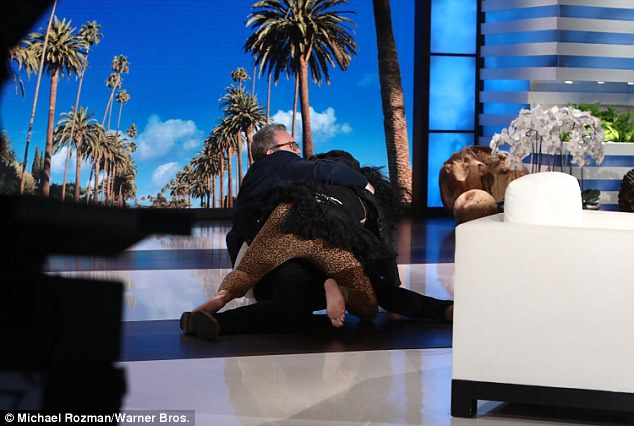 Going down: The star wrestled the production assistant, dressed as a band’s fangirl,  to the ground

When Cory jumped out of a box at the back of the set dressed as a woman during a story Eric was telling about a young fan, the star was ready and wrestled him to the ground.

‘Now who’s laughing, punk,’ he yelled as Cory crawled off stage. ‘I’ve been waiting for that guy for, how many performances?’

And when Ellen asked, ‘How’s Cory is he OK?’ Eric joking snapped back, ‘I don’t care.’ 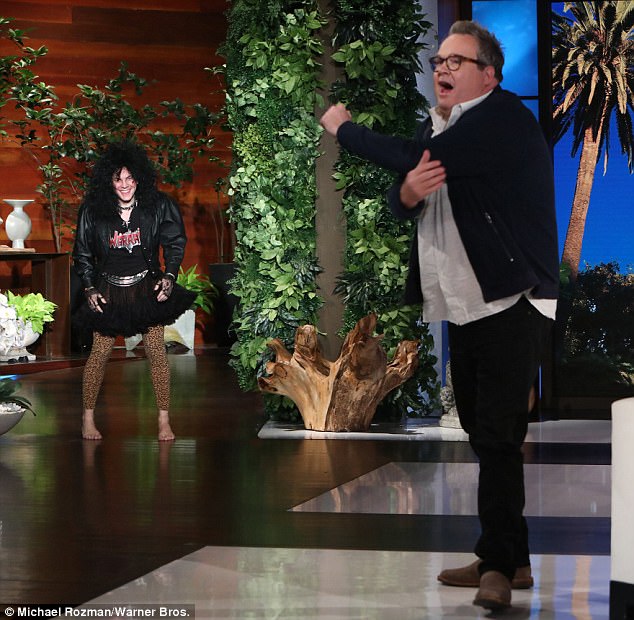 Taking his revenge: ‘Now who’s laughing, punk,’ he yelled as Cory crawled off stage and stood in the wings. ‘I’ve been waiting for that guy for, how many performances?’