After leaving a bar near his home in New York State one night almost two decades ago, Mark Hogancamp was set upon by five men who beat him so savagely that he was left with permanent brain damage and no memory even of his short marriage.

His crime was to tell the men, with whom he’d been chatting quite amiably in the bar, that he had a predilection for wearing women’s shoes.

Their brutal attack changed his life in many ways. He had to learn how to walk and talk again. 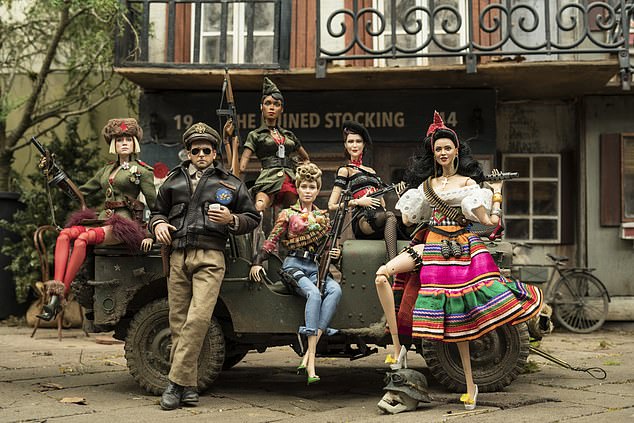 Model role: Steve Carrell and friends in Welcome to Marwen

But he also stopped drinking, having previously been an alcoholic, and embarked on a bizarre project which brought him a splash of celebrity. In 2010 he was the subject of an acclaimed documentary, Marwencol.

Now, illustrious director Robert Zemeckis, whose 1994 film Forrest Gump was about another American loner with a slow-moving brain, has dramatised, with only fitful success, the story chronicled in the documentary.

By any measure it’s quite a tale. In the wake of the attack, Hogancamp (Steve Carell) meticulously builds and then obsessively photographs a kind of model village which he calls Marwen, placing it in Nazi-occupied Belgium at the height of World War II.

He fills it with dolls, whose imaginary lives revolve around an action-man figure, a courageous U.S. Air Force pilot called Hogie.

As if there were any doubt that this character is meant to be Hogancamp’s own alter ego, Hogie, too, has a thing for women’s shoes. But for him it’s an alpha-male impulse. ‘I like to wear heels sometimes,’ he declares. ‘They somehow connect me to the essence of dames.’

Zemeckis uses CGI to animate him — think of a Thunderbirds puppet only rather more lifelike — and the film starts with Hogie’s stricken plane crashing in a forest.

Miraculously, he survives unharmed and is walking away from the wreckage when he is captured by a bunch of Nazis, whose hatred for him intensifies when they see he is sporting a pair of elegant stilettos.

Soon we have the full picture: the callous Nazis hunting Hogie are meant to represent the bigoted assailants outside the bar, while the feisty female members of the Belgian resistance, who keep rescuing him in the nick of time, are doll versions of the various women who have shown Hogancamp kindness or encouragement.

When the attractive Nicol (Leslie Mann) moves in across the road, with her own personal issues in the form of an abusive ex-boyfriend, she soon inspires a new doll, the sexiest of Marwen’s women, and romance begins to brew between her and Hogie.

In a deliberately excruciating scene, Hogancamp makes the mistake of conflating his imagination and reality, making a declaration of love to Nicol that she rebuffs as gently as she can. 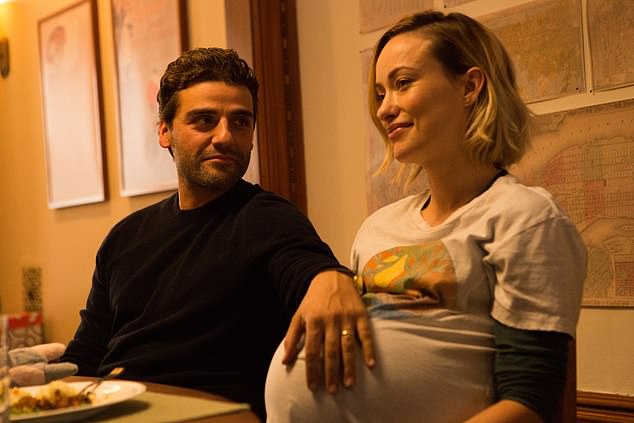 Oscar Isaac and Olivia Wilde in Life Itself

Meanwhile, the date of his attackers’ trial is drawing near, and the prosecution need Hogancamp there to testify. But he is reluctant to attend court, unwilling to be reminded of his trauma.

Instead, he withdraws more and more into his invented tableaux, which also include a single malevolent female called Deja. It is not entirely clear who she represents; perhaps his brain damage itself.

All this is precisely as strange as it sounds, and the film’s publicists have tried to make a virtue of its singularity by calling it ‘the most original movie of the year’. Maybe it is, but not always in a good way. Zemeckis manifestly so enjoys the Marwen scenes that you can’t help wonder whether he wouldn’t rather be directing a classic World War II film, without dolls or high heels or a traumatised assault victim. These scenes go on for far too long, until the film becomes bogged down in its own whimsy.

Moreover, while Carell has repeatedly flourished his straight dramatic credentials after making a name for himself playing comedy, his performance doesn’t always convince. In trying so hard to make Hogancamp seem both vulnerable and lovable, it seems slightly too calculated.

Carell was pitch-perfect as an introverted bereaved father in Richard Linklater’s 2017 film Last Flag Flying, but here, as another man horribly buffeted by life, his pitch is just a little out.

Maybe Zemeckis is to blame, for trying to sanitise and sentimentalise mental illness. Then again, what can we expect from the man who brought us Forrest Gump?

n Life Itself is similarly manipulative — and even less successful. It is written and directed by Dan Fogelman, who wrote the 2011 romcom Crazy, Stupid, Love and has since scored a huge television hit in the U.S. with a family saga called This Is Us.

This Is Us follows five members of the same family, flitting backwards and forwards through the generations as they ride the emotional rollercoaster of, well, life itself. It’s easy enough to see why Fogelman thought the same formula might work on the silver screen, and why he got the funding, and why he attracted a terrific cast, and indeed why he called it Life Itself. But it is fatally over-ambitious.

It unfolds over five chapters, linking the same family in different time frames, but hits a bum note right at the start, with a glib and incredibly annoying voiceover by Samuel L. Jackson.

At the heart of the story is the relationship of Will (Oscar Isaac) and Abby (Olivia Wilde), who both come to sticky ends. I’d have offered a spoiler alert, but really the film is its own spoiler.

It has some good moments, both poignant and funny, not to mention Annette Bening and Antonio Banderas. However, if you’re not worn down by its many saccharine contrivances, you might well be undone by the relentless, smart-alecky way characters talk to one another. A misfire.

1 One perk of being a film critic is that I rarely have to buy a ticket, but that doesn’t blind me to the ever-burgeoning cost of a trip to the pictures. Some friends recently took their two grandchildren to their local multiplex, and for four of them, including drinks and sweets, forked out almost £60.

At a time when the likes of Netflix and Amazon Prime are making it easier to watch exciting new feature films at home, the big cinema chains need to take a long hard look at their pricing structure.

2 Another advantage of my job is that I am usually spared the pain of watching trailers, but when I do sit through them in a cinema, I am horrified by how much of the plot they divulge. The point of a trailer is to make people want to see a movie, not give them the feeling they’ve seen it already. Studios and distributors take note; in trying to promote your own product, you all too frequently undermine it.

3 The near-constant bombardment of superhero movies, action blockbusters and sequels (only some of which are worth seeing), means that lots of fine films get overlooked by distributors.

In fairness, one of the films I enjoyed most last year was Mission Impossible: Fallout, the sixth picture in the long-running franchise. Nonetheless, true film-lovers are heartily sick of the commercial cynicism of the major studios. If it takes a few more big-budget flops to make them realise just how fed up we are, then bring them on.

In the meantime, happy viewing, and Happy New Year!

Wisconsin lost the Democratic National Convention, but is still at the center of the presidential race