Robert Redford gives what he has said will be his valedictory cinematic performance in the Old Man & The Gun, before shuffling, or at least walking with the purposeful but rather stiff gait of the codger he now inescapably is, into retirement.

It appears that the great man, now 82, might backtrack on his plans to retire from acting.

But this is the perfect movie for his swansong, if swansong it proves to be, not least because 50 years have passed, give or take, since he played his most famous title role.

He was a ‘Kid’ then, albeit a moustachioed one, and he’s the titular old man now. But not everything has changed.

As in Butch Cassidy And The Sundance Kid, the tool of his trade is once again a handgun, and he’s once again holding up banks. 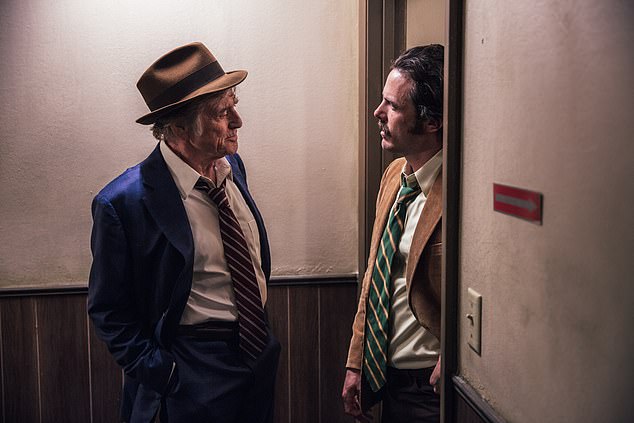 Robert Redford, now 82, gives what he has said will be his valedictory cinematic performance in the Old Man & The Gun

Writer-director David Lowery’s film rather loosely tells the true story of Forrest Tucker (Redford), a lifelong villain who started robbing banks in his mid-teens and couldn’t stop. He kept being caught and convicted, and kept escaping.

In total, he escaped 18 times. We see these prison breaks in a fleeting but jolly montage of flashbacks, enabling Lowery to use a clip of the youthful, impossibly gorgeous Redford in The Chase (1966), even before his name was global shorthand for male pulchritude.

If you’re as old as I am, you’ll remember those exchanges at bus stops and launderettes in the Seventies and well into the Eighties, before anyone had heard of George Clooney or Brad Pitt.

This is partly why The Old Man & The Gun, with its mellow jazz soundtrack, is about as sweetly elegiac as a portrait of a hardened criminal could be.

When Forrest tells his ageing girlfriend, played by Sissy Spacek, that he’s never ridden a horse in his life, we know he’s fibbing, that here is a man practically born in the saddle.

Quite consciously, there’s more than a touch of the Sundance Kid in this old rogue, who doesn’t need the money from all the banks he keeps (very politely) robbing, he just needs the kicks. 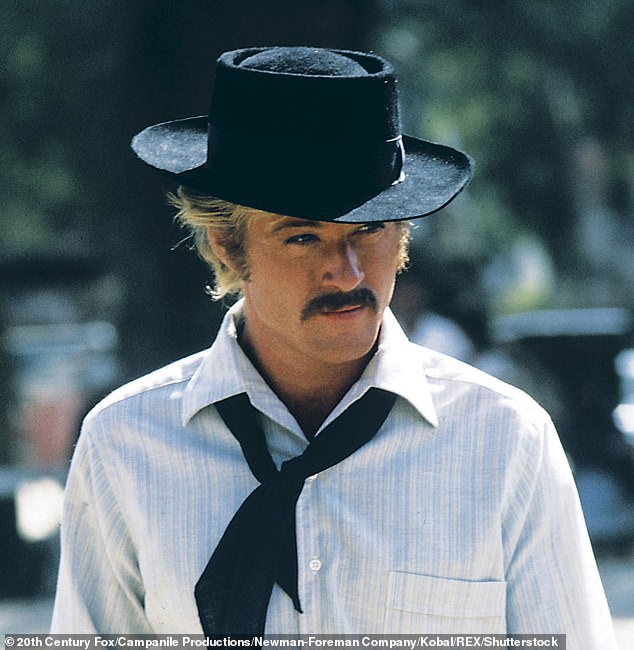 Famous for his role in Butch Cassidy And The Sundance Kid, Redford is the titular old man now. But not everything has changed

He doesn’t do it all alone. He has a pair of similarly superannuated accomplices, nicely played by Danny Glover and Tom Waits, and a dogged cop (Casey Affleck) on his tail. Again, the parallels with George Roy Hill’s 1969 classic are barely concealed.

The trio of bank robbers are dubbed the ‘over-the-hill gang’, almost as if Butch’s hole-in-the-wall gang had stuck around until they were old and wrinkled.

And what is Forrest’s disguise, as he saunters up to unsuspecting bank managers and slowly opens his jacket to show them (but, significantly, not us) his pistol? Why, a stick-on Sundance moustache, of course.

The Old Man & The Gun isn’t a thriller. It’s not really a heist movie, either, despite the number of heists.

And it’s not quite a caper movie, even though there is a soft undercurrent of comedy.

It’s more of a romance, both in the obvious sense — as Forrest courteously woos Spacek’s character, the elegant Jewel — and in a more oblique way, in that it invites us to fall for a career criminal whose gentlemanly style hardly blinds us to the terror he causes in those he charmingly threatens to shoot if they don’t hand over the loot. And yet, fall we do. 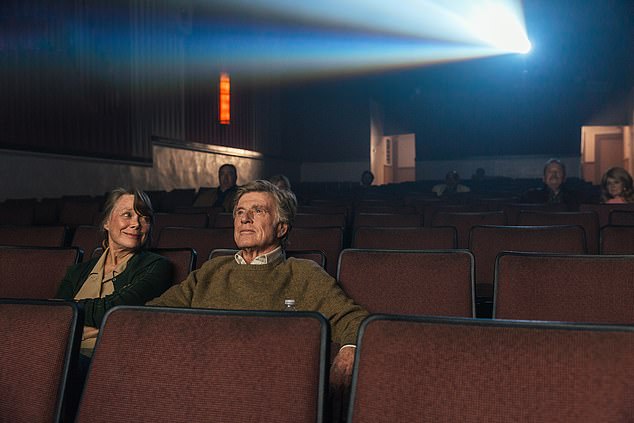 The story begins in 1981. During a high-speed chase following his latest stick-up, Forrest pulls over to help a woman standing by a broken-down car.

This is Jewel, who inadvertently provides him with cover as the police cars whizz past.

They take a shine to one another, and the gentle chemistry that fizzes between Redford and Spacek throughout this movie is one of its chief delights.

Lowery knows it, allowing his camera to linger on their twinkly-eyed banter for as long as he dares.

However, Forrest’s congenital dishonesty extends to Jewel, too. He tells her a series of lies, which she believes, and one truth — that he robs banks — that she dismisses.

She is beguiled by him, yet we don’t think of her as another of his victims, as Spacek doesn’t play her as a dupe, but as a woman of strength and substance. It’s a lovely performance.

Affleck is wonderful, too, as detective John Hunt, who takes it as a personal affront that one of Forrest’s understated robberies took place right under his nose, yet comes to admire his quarry for the singular way he goes about his business.

Lowery shows us a little of Hunt’s domestic life as really he crafts three separate stories which occasionally converge — that of the obsessed cop, of a twilight romance and of the bank-robbing spree.

It’s a whimsical film, never likely to become a classic, but written and directed with tremendous lightness of touch, and enough rigour to keep it to 93 minutes.

Lowery’s most recent picture, last year’s acclaimed A Ghost Story, was similarly concise. How refreshing to find a film-maker who knows how to tell a story succinctly.

Of course, it helps to have a leading man as naturally laconic as Redford has always been.

It is no reflection on his acting ability that while Spacek and Affleck are enveloped by their characters, he and Forrest Tucker are somehow always there in tandem. The old man and the icon.

If this really is curtains, it’s a great way to take a bow.

THIS SMOOTH OPERATOR WILL BRING A SMILE TO YOUR DIAL

Boots Riley’s feature debut is a wild satire set in Oakland, California, which takes broad aim — not so much scattergun as blunderbuss — at race, class, capitalism and much besides.

It starts promisingly and becomes wackily incoherent, but the very least you can say about it is that it’s not short of ideas. 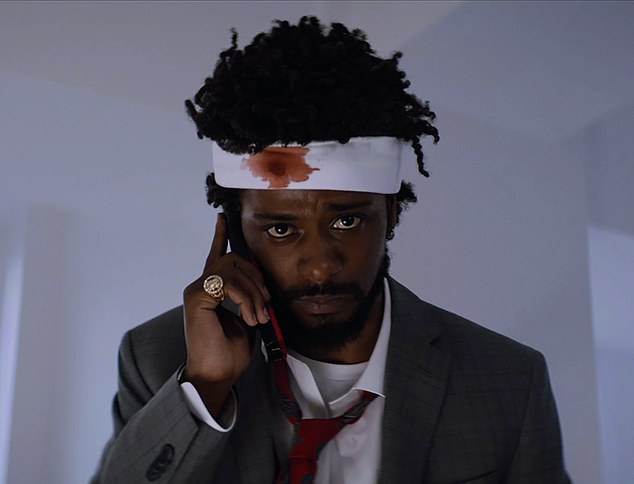 Boots Riley’s feature debut is a wild satire set in Oakland, California with young African-American Cassius Green as the hero

He struggles in a new job in tele-sales until the old guy in the booth alongside him (Danny Glover) advises him to talk ‘white’. Suddenly, he makes sale after sale, and gets a series of lavish promotions.

This brings him to the notice of a slick tycoon called Steve Lift (Armie Hammer), who runs a sinister ‘lifestyle’ corporation called WorryFree.

In fact, Cash has plenty to worry about, since his rise up the corporate ladder has alienated him from his lover (Tessa Thompson) and many friends.

Made for a relative pittance, Sorry To Bother You has already been a modest commercial hit in the U.S. and is being hailed by some critics there as a comic masterpiece.

It’s very far from that, unless you like your comedy bewilderingly zany. At times, it loses the plot both figuratively and literally. Nevertheless, it has heart, and energy, and laughs.

HE WALKS THE WALK…BUT RICK STILL MISSES A FEW TRICKS

The French director Yann Demange has admitted that ‘in many ways I bit off more than I can chew’ in making White Boy Rick, the true story of a teenage criminal who became an FBI informant in crime-ridden Eighties Detroit.

Unfortunately, it shows. Demange is a talented film-maker whose 2014 nail-biter ’71 remains one of the most gripping thrillers ever made about The Troubles in Northern Ireland.

But White Boy Rick, relentlessly hard as it tries to tug on our emotions, and despite Matthew McConaughey giving his all as one of those seedy but well-intentioned losers at which he so excels, never quite succeeds. 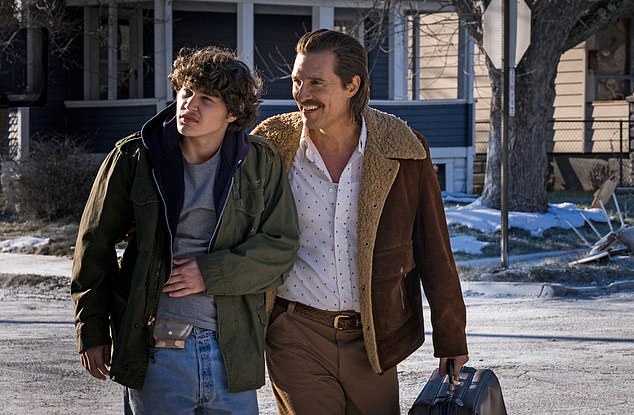 McConaughey plays Rick Wershe Snr, a gun dealer whose idea of sound parenting is to give his son, also Rick (Richie Merritt), a proper grounding in how to buy and shoot modified AK47 rifles.

Young Rick’s crack-addict sister, Dawn (the English actress Bel Powley, in a role somewhat removed from her haughty Princess Margaret in 2015’s A Royal Night Out), is less enamoured of their father. She hates him.

He walks the walk, talks the talk, and wears the requisite ghastly gold jewellery.

But, unusually, he’s not an African-American, hence the nickname. It’s also why the FBI alight on him as a prospective informant.

The story unfolds episodically through the mid- Eighties, and is never less than watchable, thanks largely to a handful of genuinely fine supporting turns, from McConaughey, Powley, Jennifer Jason Leigh as an FBI agent, and the veterans Piper Laurie and Bruce Dern as Rick’s bemused grand- parents, with much to be bemused about.

Alas, Merritt is strangely stolid in the title role. With a more charismatic lead performance, Demange might have found more joy in getting us to root for a young man who, eventually, predictably comes a huge cropper.

As it is, he seems to get pretty much what he deserves.