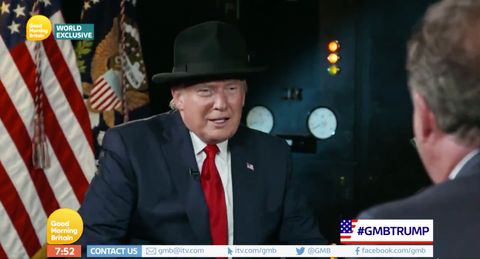 Another day, another hilariously bad look from Donald Trump, America’s answer to the question, “But what if the president looked like a goon all the damn time?” One thing I grudgingly have to grant: This particular look was not of his own design.

Unlike those bafflingly large khakis or that just-plain-terrible tux, the latest entry into this week’s cavalcade of sartorial shame came via a different bloviating old white dude. Piers Morgan, I would tip my hat to you for this one, but that might be a little on the nose. And anyways, I can’t really decide if your decision to give Trump a Churchill hat—a Homburg from the legendary British PM’s actual hat by his preferred milliner, Lock & Co.—was an act of outright sycophancy or an uncharacteristically clever joke.

Whatever the motivation, the hat was bestowed on Big Don. Trump proceeded to pinch the crown, which isn’t how Churchill himself generally wore it, but according to Lock isn’t technically incorrect, either. And then, the moment of truth: Trump placed it ever-so-gingerly upon his head, careful, as he was, not to disturb the artfully arranged bird’s nest of follicles that also rests there.

Reader, it did not look great.

Another grudgingly granted truth: The hat’s a little big for him. That’s part of the problem. But the other part of the problem is that it invites a direct comparison between Trump and Winston Churchill. I’m not even going to bother delving into the philosophical aspects of opening that particular can of worms, but I’ve got to say one thing: Churchill wore it best.

Jonathan Evans
Jonathan Evans is the style director of Esquire digital, focusing on fashion, grooming, accessories, and, of course, sneakers.