As President Donald Trump left open the possibility he might release Rod Blagojevich from his federal prison sentence, the disgraced former Illinois governor this weekend set off for a solitary run underneath the setting sun.

Wearing black New Balance sneakers and rocking his now-silver mane, Blagojevich bounded down the porch steps at the boomerang-shaped camp building where he’s held and ran past a group of fellow inmates.

With his head down, Blagojevich jogged 20 laps Saturday on a dirt path that snakes around a baseball diamond with a mural of Ernie Banks and Nolan Ryan. Red, and white and blue bunting adorned the backstop.

At one point on his hourlong run at the prison camp outside Denver, Blagojevich passed a large goateed inmate and gave him a friendly wave.

Trump’s Wednesday night announcement that he is “very strongly” considering whether to commute Blagojevich’s 14-year sentence for public corruption — which included attempting to trade Barack Obama’s U.S. Senate seat for personal gain as well as trying to shake down executives from a children’s hospital and the horse-racing industry for campaign contributions — has transfixed Chicagoans, who wonder whether the imprisoned former governor will soon be back among them. 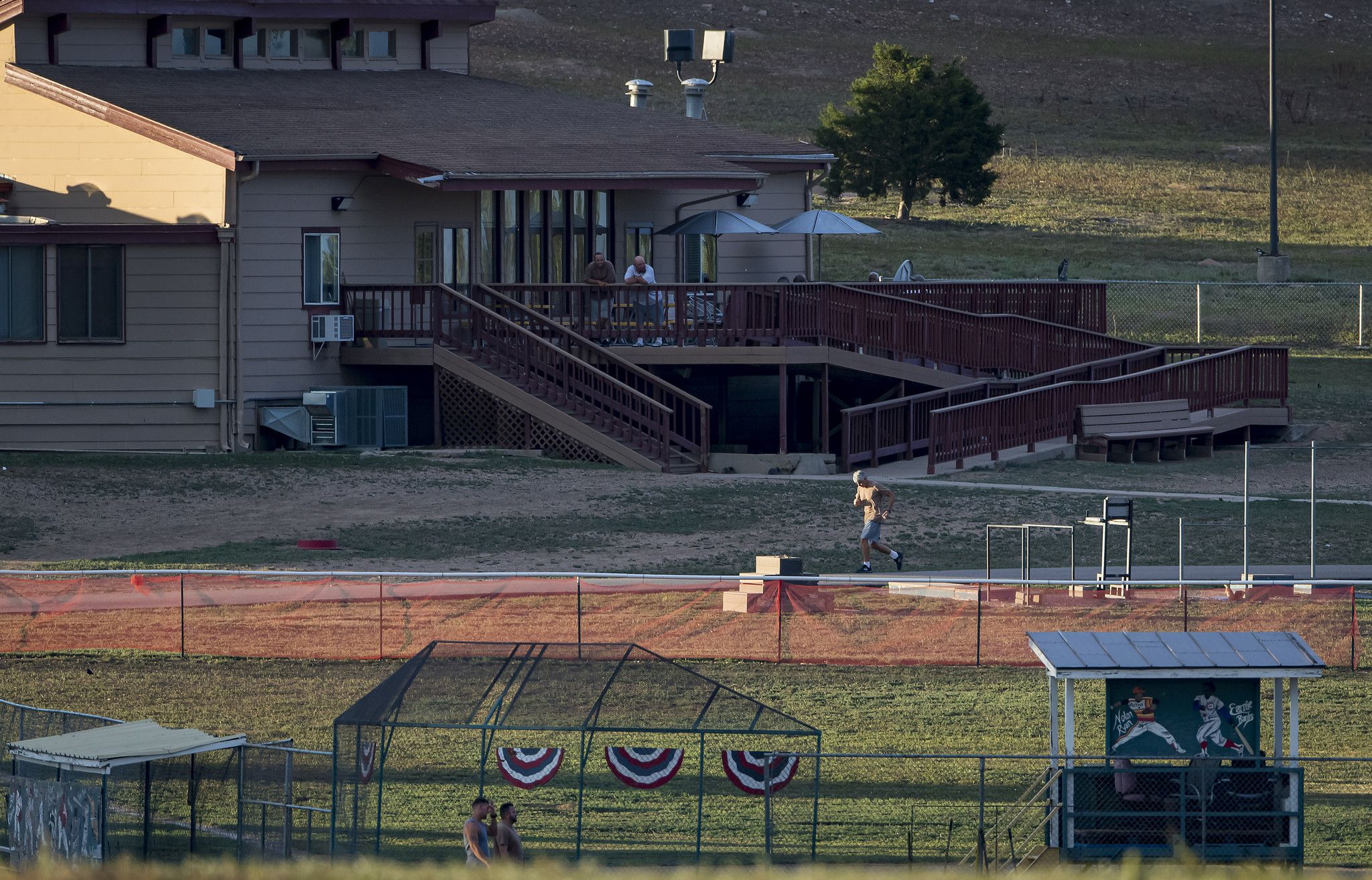 Former Gov. Rod Blagojevich goes for an evening run outside the minimum-security satellite camp of the Federal Correctional Institution-Englewood where he is an inmate near Littleton, Colorado, on Aug. 10, 2019. (Brian Cassella / Chicago Tribune/)

Trump seemed to take a step back on releasing Blagojevich based on his Thursday Twitter post: “Rod Blagojevich, the former Governor of Illinois, was sentenced to 14 years in prison. He has served 7 years. Many people have asked that I study the possibility of commuting his sentence in that it was a very severe one. White House staff is continuing the review of this matter.”

His wife, Patti Blagojevich, has mounted an intense campaign for her husband’s release, which has included appearing on Fox News, appealing directly to the president on his favorite cable news station by attempting to link the governor’s ordeal with former FBI Director Jim Comey and other Trump targets.

Blagojevich’s relationship with the president dates back to 2009, when the just-removed governor was a contestant on Trump’s TV show, “The Celebrity Apprentice.” Blagojevich only made it to the season’s fourth episode, when he was fired for bungling facts about Harry Potter.

Blagojevich was once a rising star in Illinois politics. The son-in-law of legendary power-broker Richard Mell, Blagojevich was a member of the U.S. House of Representatives before Illinois voters elected him governor in 2002 and again in 2006.

Blagojevich followed Republican George Ryan, who also was convicted and imprisoned on federal corruption charges. The Democrat’s time in office was plagued by corruption allegations.

Rod Blagojevich, the former Governor of Illinois, was sentenced to 14 years in prison. He has served 7 years. Many people have asked that I study the possibility of commuting his sentence in that it was a very severe one. White House staff is continuing the review of this matter.

Trump’s talk of freeing Blagojevich has drawn criticism from good government experts and Illinois Republicans. But his supporters have continued their public campaign. On Friday, “Welcome Back” balloons sprung up on the Blagojevich family home in the Ravenswood Manor neighborhood.

Patti Blagojevich also made a rare public appearance on Saturday, marching in the Bud Billiken Parade with the Rev. Jesse Jackson, who has joined her in pushing leniency and last month co-signed a letter to the president with his son, Jesse Jackson Jr., asking that he grant her husband a full pardon.

Jesse Jackson Jr., a former Democratic congressman from Chicago, also was convicted of federal corruption charges and had actively sought the Obama Senate seat that Blagojevich was convicted in part of trying to sell.

While Trump’s potential action remains the talk of Chicago, it’s a much quieter scene outside the Colorado prison where Blagojevich stays.

Alan Ellis, a veteran attorney who authored the “Federal Prison Guidebook,” said Blagojevich is housed at a “very well-run facility.”

“Whenever I can, I try to get my clients in there,” Ellis said. 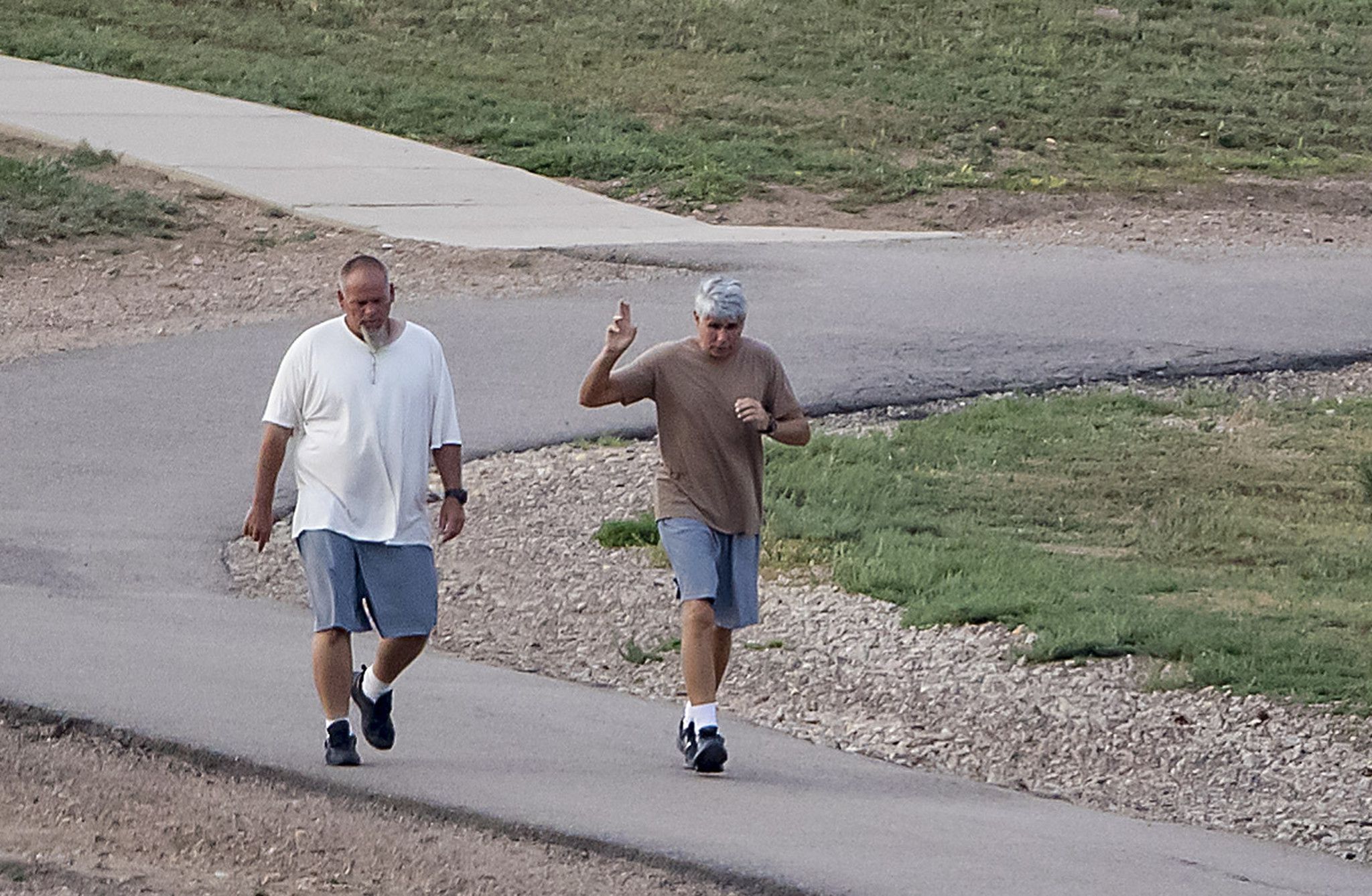 Former Gov. Rod Blagojevich, right, waves as he goes for an evening run outside the minimum-security satellite camp of the Federal Correctional Institution-Englewood where he is an inmate near Littleton, Colorado, on Aug. 10, 2019. (Brian Cassella / Chicago Tribune/)

Federal Correctional Institution-Englewood includes a tan fortress surrounded by barbed wire that holds 1,117 inmates. A small number of those inmates, including Blagojevich, is housed at a smaller camp several yards from the more imposing main building.

There, inmates can freely roam the grounds for up to 16 hours a day, according to the camp’s handbook.

Throughout the day, some prairie dogs forage around the grounds while others stand watch just behind U.S. government signs declaring “No Trespassing.”

With the sun rising over Colorado’s mountains behind them, inmates stepped outside on Saturday for their morning routines.

Some did pullups on an exercise bar. Others drank coffee on the porch. Shirtless prisoners walked along the track. Picnic tables on the grounds give the prisoners a place to sit and talk.

As 56-year-old pension consultant Matt Poppe walked up to the third hole at Foothills, inmates walked around a running track next to the fairgrounds and shouted something about his putt.

“There’s enough chatter if you walk by this part of the golf course, guys giving you ‘help,’” Poppe said, laughing.

Asked if Blagojevich has ever heckled him, Poppe said, “I honestly don’t know. I don’t look at them that carefully.”

In a 2017 interview with Chicago magazine, the former governor talked about taking long runs and sitting in the camp’s tub afterward. The magazine also reported that inmates at the camp “have been known to venture off” to a Walmart down the road to buy cigarettes. 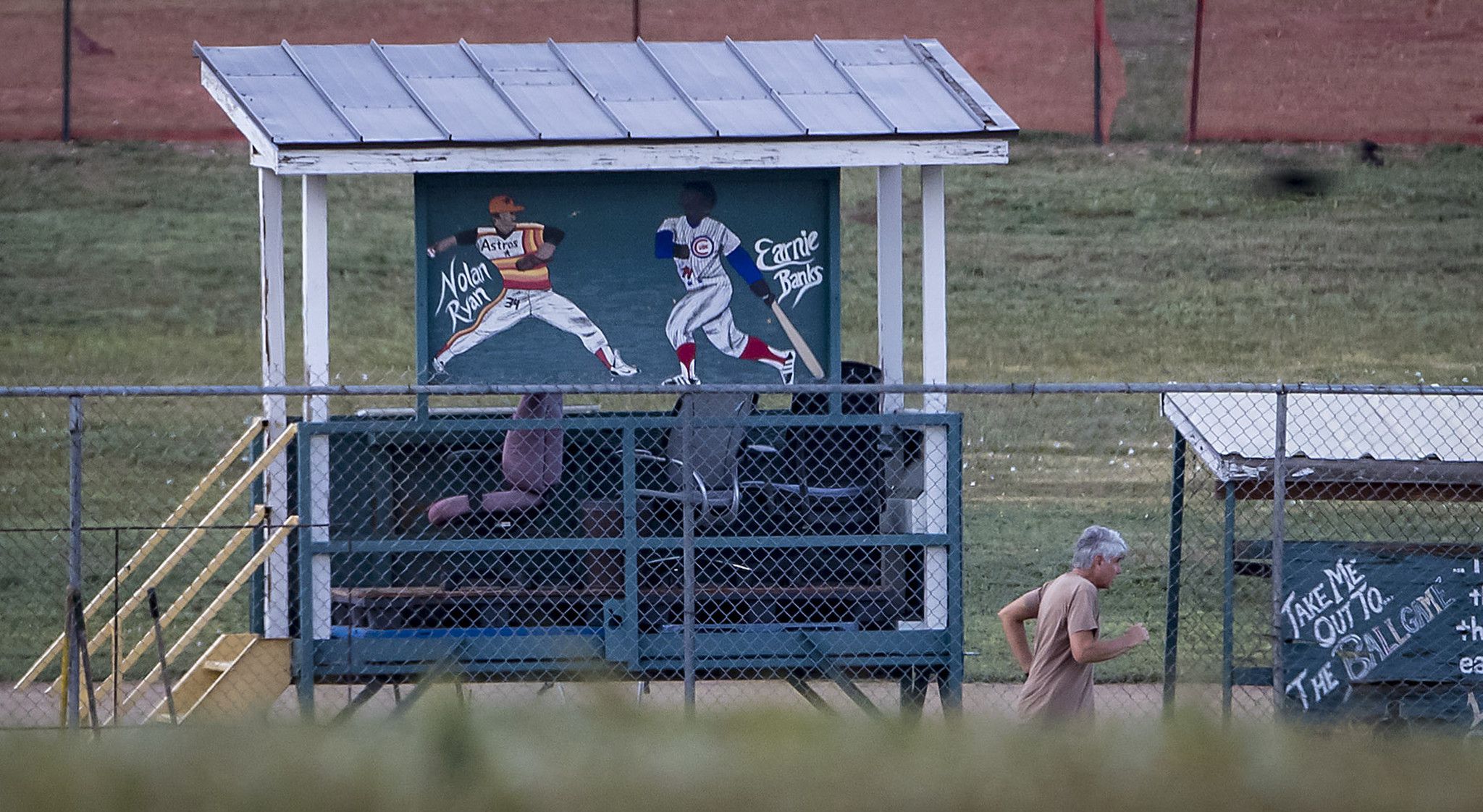 Former Gov. Rod Blagojevich circles a baseball diamond during an evening run outside the minimum-security satellite camp of the Federal Correctional Institution-Englewood where he is an inmate near Littleton, Colorado, on Aug. 10, 2019. (Brian Cassella / Chicago Tribune/)

Blagojevich in that 2017 interview contrasted his time leading Illinois with his prison job cleaning up two hallways.

“My jurisdiction was once all of the state of Illinois,” Blagojevich said.

FCI Englewood has held other notable inmates, but Blagojevich has the highest profile of those currently housed on the premises.

Blagojevich is known to many in the community, though they often mangle his last name.

One woman approached journalists on the sidewalk across the street from the prison and asked, “Are you guys here for the Blag-don-a-vitch guy?”

Despite his infamy, people in Colorado aren’t awestruck toward their well-known neighbor.

“We just make fun of him because it’s like, that’s Chicago politics,” Engel said. “We don’t care.”

Can Amy Klobuchar pull off a surprise in Iowa’s presidential caucuses?

Your ‘Medical Mask Exemption Card’ Is a Lie