Gabrielle Union was seen for the first time since her controversial firing from America’s Got Talent.

The 47-year-old television star was joined by her husband Dwyane Wade as they headed to a spa session in Los Angeles on Saturday.

The outing came just days after a bombshell Variety report that claimed judges Union and Julianne Hough’s contracts were not renewed after they had complained about alleged racist jokes and a toxic environment behind the scenes of the show.

The conflict was reportedly sparked when Jay Leno made an anti-Korean slur during his guest appearance on the show back in April according to that Variety report. 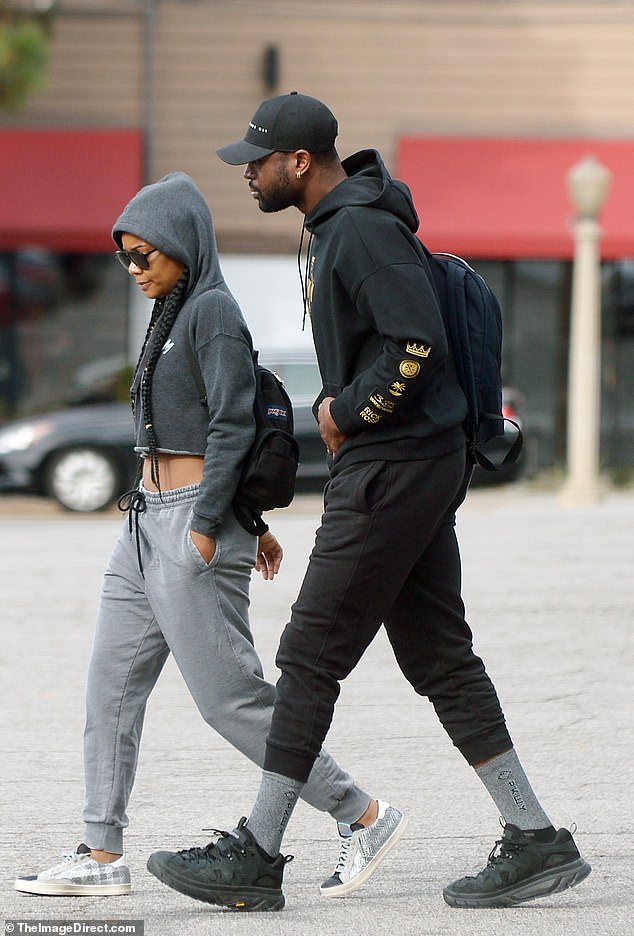 Rest and relaxation: Gabrielle Union was joined by her husband Dwyane Wade as they headed to a spa session in Los Angeles on Saturday as the couple were seen for the first time since her controversial firing from America’s Got Talent

Since the initial reports Wade confirmed his wife Union was fired from the reality show last week, as several NBC sources now say they’re baffled by her booting from the show.

She also received more than half a dozen notes criticizing hairstyles as ‘too black’ for the show’s core audience, according to four sources with direct knowledge.

Taking to Twitter late Wednesday, Wade inferred that Variety ‘s report was accurate, stating that his wife is ‘an advocate for our community and culture’.

‘As proud as I was of her being selected as a judge on #AGT — I am even more proud of her standing up for what she stands for and that’s US,’ the Miami Heat shooting guard wrote. 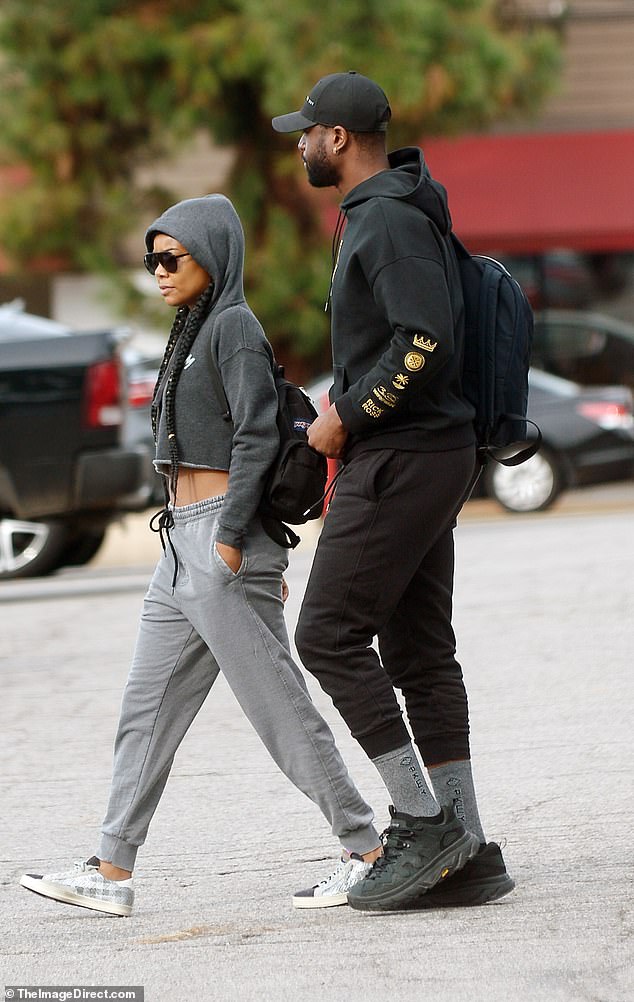 Interesting: Since the initial reports Wade confirmed his wife Union was fired from the reality show last week, as several NBC sources now say they’re baffled by her booting from the show

The two were dressed for comfort for their pampering session as Gabrielle sported a cropped grey sweater with matching sweatpants.

On Monday, women’s advocacy group Time’s Up – which is responsible for the #MeToo movement in Hollywood – issued a very strongly worded statement in support of Union as they condemned NBCUniversal.

CEO Tina Tchen blasted the media giant for what she observed as a ‘pattern’ within NBC as an institution in which they protect powerful men while retaliating against women who speak out.

She said:  ‘Gabrielle Union’s experience at ‘America’s Got Talent’ is exemplary of the double bind that black women face at work. 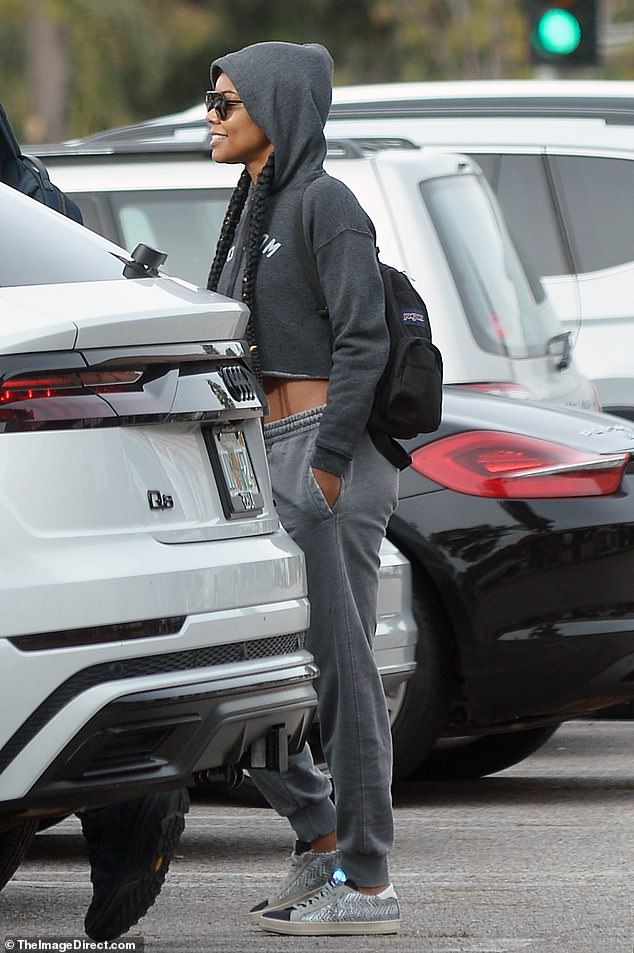 Relaxed: The two were dressed for comfort for their pampering session as Gabrielle sported a cropped grey sweater with matching sweatpants

‘Not only did Union reportedly endure and witness racist and inappropriate behavior – including racially-insensitive comments and excessive criticism about her physical appearance – but it also appears she was punished for speaking out: the company labeled her as ‘difficult’ before ousting her from the show altogether.’

She goes on to say that Union’s harrowing story is not the only one that has been covered in the media.

Tchen explained:  ‘Union’s story is deeply troubling on its own, but her experience is particularly problematic because it follows a pattern of NBCUniversal protecting the careers of powerful men at the expense of women who speak out. Union’s experience shows that NBCUniversal still has a lot of work to do to change its culture so discrimination, harassment, and retaliation are no longer tolerated at the company. Building a culture of safety and equity requires continuous, intentional work sustained over a long period of time – even when a company isn’t in the throes of a crisis.

‘Ensuring people of all kinds are respected and supported at work is critical for any company, but especially a media company like NBC that has such an outsized influence in our culture and in our lives.’ 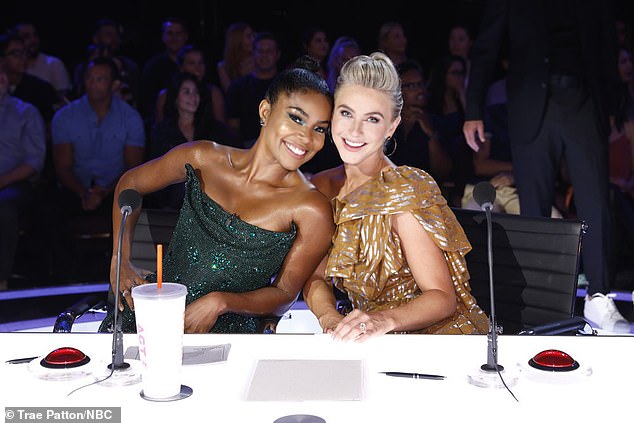 Happier days: The outing came just days after a bombshell Variety report that claimed judges Union and Julianne Hough’s contracts were not renewed after they had complained about alleged racist jokes by Jay Leno and a toxic environment behind the scenes of the show 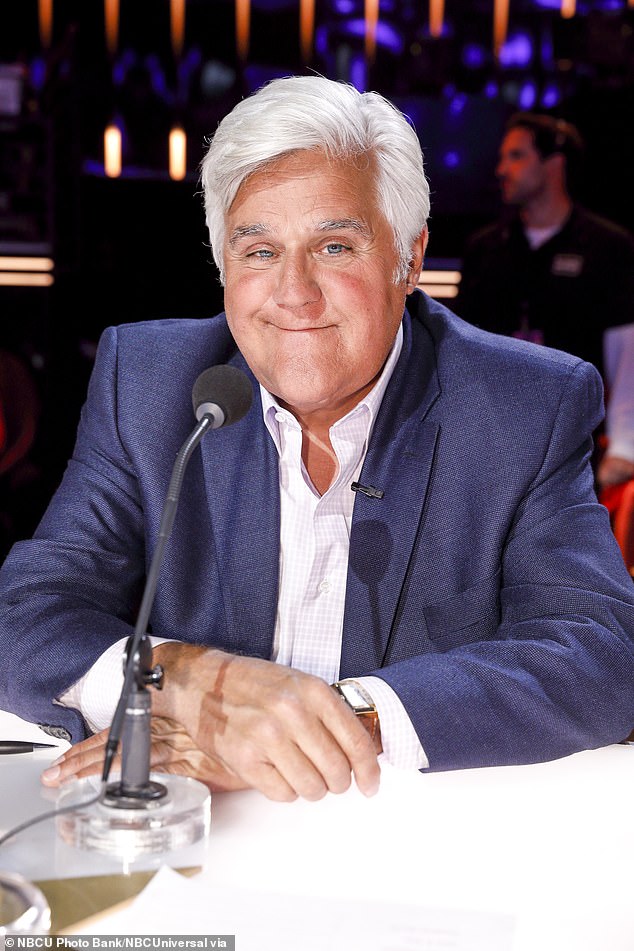 ‘I love Gabrielle Union, she’s a great girl. I really enjoyed working with her, she’s really good’: On Sunday night, Jay Leno made his first comments since the firing of Union from the reality series after complaining about his racist anti-Korean joke

On Sunday night, Jay Leno made his first comments since the firing of Union from the reality series after complaining about his racist anti-Korean joke.

The 68-year-old comedian was seen leaving his special set at The Comedy & Magic Club in Hermosa Beach, California on Sunday night.

He was asked several questions about the controversy surrounding the reality talent competition show and dodged most of them until the 47-year-old television personality Union came up.

Jay – who guest starred in an episode which aired in April –  said:  ‘I love Gabrielle Union, she’s a great girl. I really enjoyed working with her, she’s really good.’ 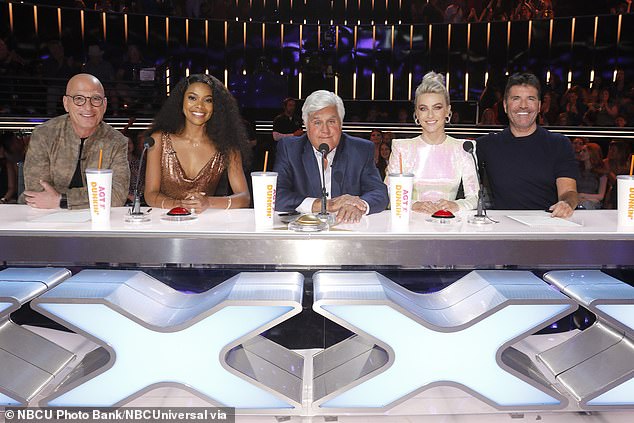 Point of conflict: The 69-year-old comedian guest starred in an episode which aired in April as he is seen pictured to the right of 47-year-old Union on the judges panel

Leno said:  ‘I don’t know but I think she’s a great girl’

He was also asked if he regrets telling the Korean joke centered around eating dogs but the comedian jokingly mimed like he was giving a response but no actual words were coming out of his mouth.

During his appearance on America’s Got Talent back in April, Leno taped a short interstitial segment in North Hollywood to be used between performances with Union and Hough nearby. 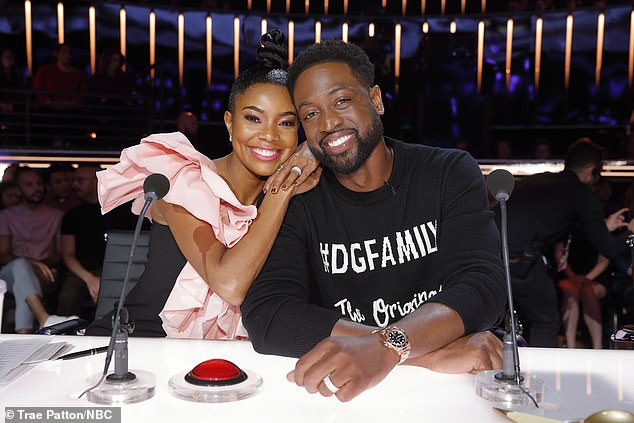 Dynamic duo: Wade is pictured visiting his wife on the set of the popular NBC show back in August

According to the Variety report released last week, the comedian did a joke about a painting of executive producer Simon Cowell surrounded by his dogs, saying it looked like something one might see ‘on the menu at a Korean restaurant,’ claim four people who heard him.

One Asian staff member among the ‘very few’ Asian members of the crew and creative team was allegedly offended by the crack, which was viewed as perpetuating stereotypes about Asians as barbaric dog eaters.

The consumption of dog meat in South Korea and in other Asian natures has decreased in recent years, and younger citizens and animal rights activists have harshly condemned the practice. 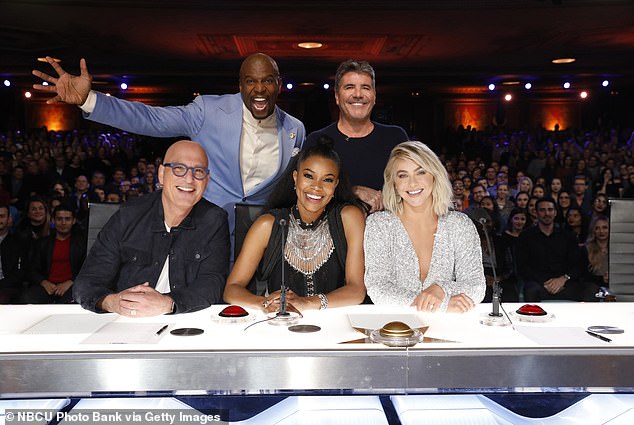 Union (center front) is pictured with her AGT co-stars (clockwise from top left) Terry Crews, Simon Cowell, Julianne Hough and Howie Mandel. Hough has also been fired from the show

One network insider told The New York Post on Thursday that the star had a  ‘productive conversation’ with producers following Leno’s alleged slur.

Meanwhile, sources at NBC are now claiming to be ‘puzzled’ by the fact that Union was not invited to return to the show’s 15th season next year.

Meanwhile, another NBC source told The Post that at least six America’s Got Talent employees expressed confusion about the claims Union’s hair was ‘too black’. 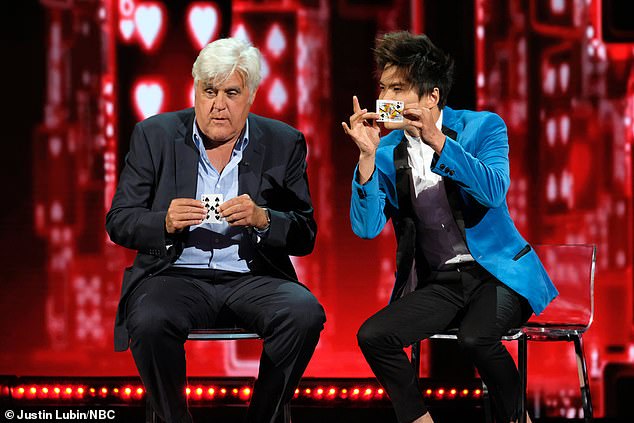 Jay Leno (left) appeared on the show in April, during which he made the alleged racist joke that sparked a complaint from Union 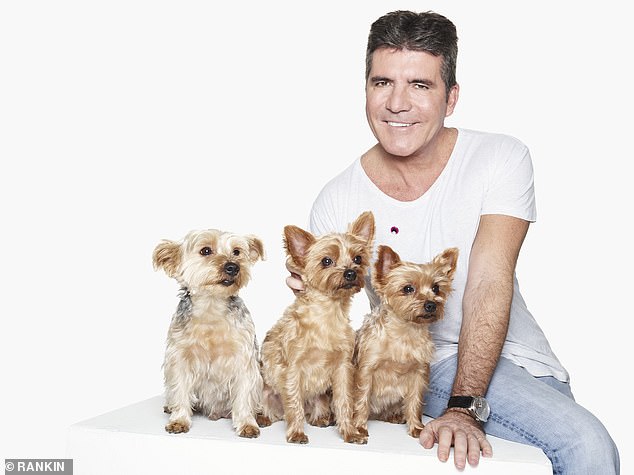 Leno reportedly made a joke about a painting of executive producer Simon Cowell surrounded by his dogs, saying it looked like something one might see ‘on the menu at a Korean restaurant’

‘No one had heard this,’ the insider stated, adding that any feedback about Union and Hough’s hair would only be about ‘continuity’ for the audience.

‘I would honestly be shocked [about alleged racism]. Ensuring a safe environment is so important to the show. Anytime someone comes forward and has issues, we take things very seriously’.

The source added that America’s Got Talent had a diverse cast and crew.

DailyMail.com has reached out to NBC, who stated that ‘America’s Got Talent has a long history of inclusivity and diversity in both our talent and the acts championed by the show.

‘The judging and host line-up has been regularly refreshed over the years and that is one of the reasons for AGT’s enduring popularity. NBC and the producers take any issues on set seriously.’ 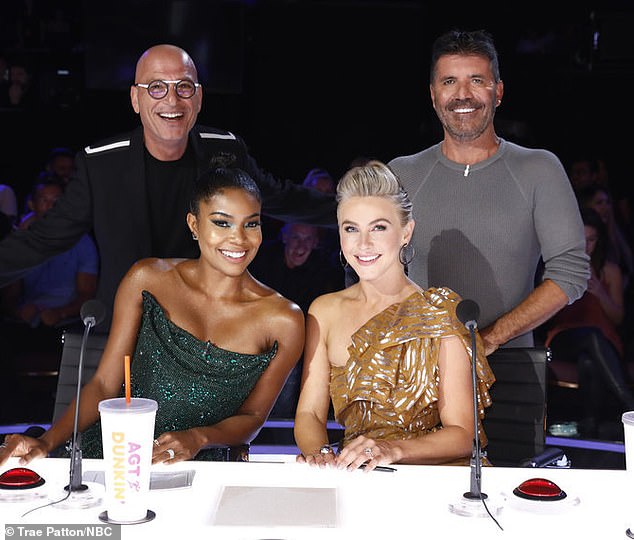 Wade took to Twitter Wednesday morning, where he addressed the report

Meanwhile on Twitter, Wade congratulated his wife on a successful season of the show.

‘Men lie, Women lie, numbers don’t’ Over this past year I’ve been approached  by many people saying that my wife @itsgabrielleu is the main reason they’ve started watching #AGT or that they love her insight and sincerity on the show,’ he wrote.

‘So when i got the news that my wife was being fired – my first question was obviously why!? I am still waiting on a good answer to that question.

While this season’s finale had significantly smaller viewership than the previous year, it still came out on top in the coveted 18–49 demographic.

Another important metric is social media impressions, which doubled with the ouster of previous judges Heidi Klum and Mel B of the Spice Girls.

In particularly, Union was responsible for around half of the show’s 25 million social media impressions, according to Nielsen Social, a compelling statistic suggesting she was the most popular judge on the show.

On Thanksgiving Day, Union made her first comments about the firing as she also took to Twitter writing: ‘So many tears, so much gratitude. THANK YOU! Just when you feel lost, adrift, alone … you got me up off the ground. Humbled and thankful, forever.’

Her fellow ousted co-star Hough made a statement to Variety that she ‘had a wonderful time on America’s Got Talent.

‘I loved working with the cast, crew and producers. I am happy to continue my working relationship with NBC. I’m looking forward to what the future holds,’ she said. 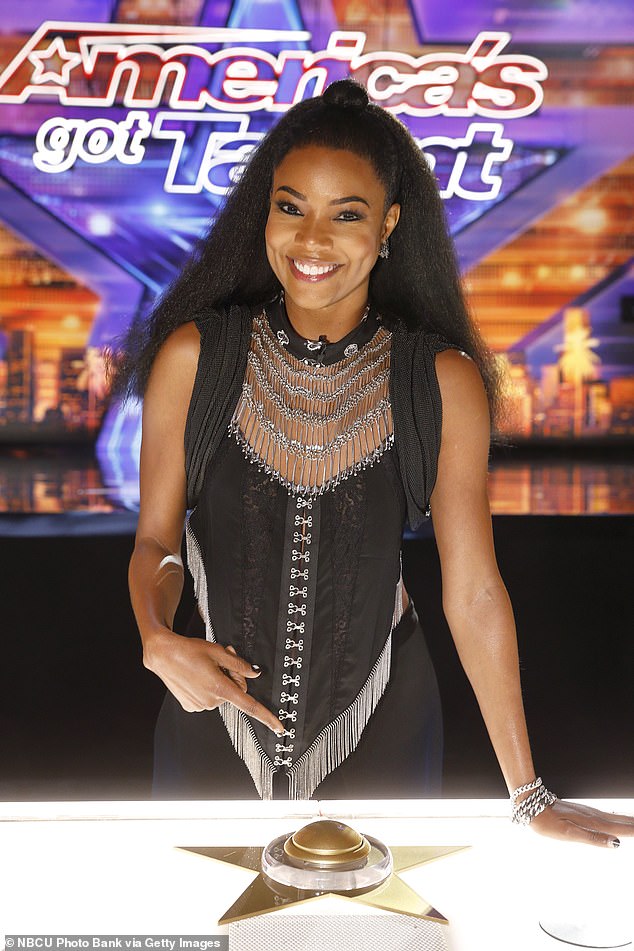 Union has not publicly commented on her ousting from AGT

Brindille restaurant, reopening Friday, had a long road back

Amber Alert issued for child inside stolen minivan in Bridgeview