What a difference a year makes.

It was just a full mere 12 months ago that fans of burgeoning rap power couple Cardi B and Offset were left stunned when, at the end of what was a truly celebratory year for the diva that saw her birth not only her debut album, Invasion of Privacy, but their daughter Kulture, as well, she announced to the world that it was over between her and the man whom she’d married in secret.

Days after the new parents delivered a PDA-filled performance at the 102.7 KIIS FM Jingle Ball concert in Inglewood, Calif, where the “Press” rapper gushed to the crowd about how her man was “so fine,” she dropped the bomb, speaking directly to fans in a video on Instagram released late in the evening of December 4, 2018.

“So everybody been bugging me and everything and you know, I’ve been trying to work things out with my baby father for a hot minute now and we’re really good friends and you know we’re really good business partners,” Cardi explained. “He’s always somebody that I run to to talk to and we got a lot of love for each other but things just haven’t been working out between us for a long time and it’s nobody’s fault.”

She continued, “I guess we grew out of love, but we’re not together anymore. I don’t know. It might take time to get a divorce and I’m gonna always have a lot of love for him because he is my daughter’s father and yah.”

Commenting on the post, her estranged husband wrote, “Y’all won.”

In the hours after Cardi’s announcement took the world by storm, speculation over what happened to break them apart ran rampant, with a source telling E! News at the time that rumors over Offset’s fidelity—or lack thereof—pushed her “over the edge” and seemingly past the point of no return. “Cardi will always love Offset, but ultimately lost trust in their relationship,” the inside told us, adding that she “would love to keep the family together, but knows this is what is best right now.” 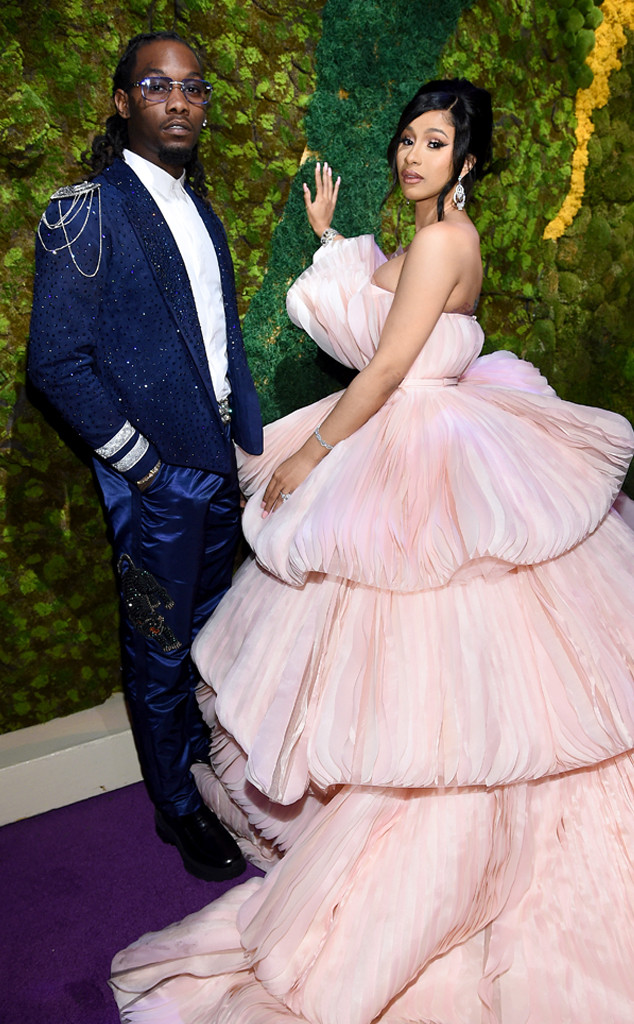 Offset himself took responsibility for breaking his wife’s trust in a video confession shared on Dec. 14, his 27th birthday, telling Cardi and the world, “I was partaking in activity that I shouldn’t have been partaking in, and I apologize. You know what I’m saying? For breaking your heart, for breaking our promise, for breaking God’s promise and being a selfish, messed up husband.”

He continued, “I want to be able to spend the rest of my life with you. I apologize. I am sorry for what I have done to you. I didn’t f–k that girl, but I was entertaining her, you know what I’m saying? I apologize, and I love you, and I hope you forgive me. My birthday wish is just to have you back.”

While Cardi wasn’t able to make it a clean break—the two took a trip to Puerto Rico purely because, as she put it in an Instagram live chat, she “just had to get f–ked” shortly after he made the decision to ambush her onstage at the Rolling Loud Festival in Los Angeles in the middle of her set to present her with a massive cake and a floral arrangement that read “Take Me Back Cardi” (and was so ridiculed for it by the internet that he had to issue an apology for that, too)—as she figured things out, she wasn’t so sure that she’d ever take her decision back.

“I didn’t want to go to marriage counseling,” she told Harper’s Bazaar in February. “He suggested it, but it’s like, I don’t want to go.’ There’s no counselor or nothing that could make me change my mind.”

Responding to the question of whether she thought they’d ever get back together, she said, “I don’t think so.” She also added, “Who knows? You never know, you can never tell.”

That story was published on February 7. Three days later, as she took the stage at the 2019 Grammys to accept the award for Best Rap Album, Offset was by her side. “You husband, thank you,” she told him as he beamed with adoration for his wife.

Whatever happened to flip that switch and bring them back together, neither were too keen to share too many details. “It’s a personal thing,” Cardi told People. “My relationship—my marriage—is not for them. It’s not for them.”

On The Breakfast Club later that month, Offset offered, “You gotta go through steps and different things so that we can grow. Not on the TV though, real behind the scenes, getting to know each other, getting to know who you’re with and appreciate them all the way around. Because that one mistake made me appreciate her.”

Reflecting on the separation and her decision to take him back, Cardi told Cosmopolitan in April, “It’s like everybody is coming down my neck like, ‘Why are you not leaving him? You have low self-esteem.’ I don’t have low self-esteem. I know I look good. I know I’m rich, I know I’m talented. I know I could get any man I want—any basketball player, football player. But I want to work out my s–t with my man, and I don’t got to explain why. I’m not your property. This is my life… I’m going to take my time, and I’m going to decide on my decision … It’s not right, what he f–king did—but people don’t know what I did, ’cause I ain’t no angel.”

By July, she was tattooing his name on the back of her thigh. And come Sept. 20, they were celebrating their second wedding anniversary. “Happy marriage anniversary hubby…We keep learning and growing. Thats what marriage about,” she wrote on Instagram.

And now, a year out from the split, it’s as if the universe has given the couple one final test to see if the darkest chapter in their relationship really is behind them. Almost as if on cue, a fresh round of cheating rumors has arisen, spawned from a hack of Offset’s Instagram and Twitter. And this time around, neither of them are sweating it.

“You know, I know babe, you’ve done some dumb sh-t. Everybody knows he’s done some dumb sh-t,” Cardi said in an Instagram video on Tuesday, Dec. 3 as her husband held Kulture in his arms just behind her. “But come on now, [he’s] not dumb, he’s not crazy, we’ve been so good, we had a sweet weekend, our life has been good, he’s not going to play himself like that. That’s why I’m not going to entertain that, that’s why I’m not getting rowdy. Simple as that.”